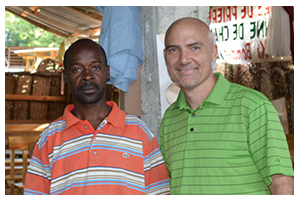 - In his 3rd year of Seminary training

After Loujan was saved as a young man in 1990 he began to attend Church as a “regular member”. Not long after, though, he was asked to teach Sunday school, and helped lead worship. Eventually he began to fill in for the preacher at times, not knowing it would lead to a passion for preaching that he has cultivated to this day.

The Church he now Pastors, began in 2005. At that time, a few believers began to meet and eventually rented a piece of land to plant a Church. This young congregation asked Pastor Loujan to be their Pastor. For 3 months,  Loujan declined because he had always wanted to be a doctor and never expected to be a Pastor. After 3 months, God spoke to him and allowed him to see that he was being called to to help bring spiritual healing into his village.

Pastor Loujan and Legalize Chalmette Church in Grand Goave have been reaching the surrounding villages with the love of Jesus and the message of the gospel for several years now with an average attendance of 250 each Sunday. They meet in a “brush arbor” structure made from woven palm fronds and sticks with a tin roof. Though the people of the area have little, the praise and worship that emanates from that little place can be heard far beyond the “church walls”.  In fact, most Sundays the people (many who walk from great distances) must sit outside in the mango grove to attend because there just isn’t enough room “inside”.

After much prayer, Pastor Loujan and his Church have located a 2-acre piece of property that they believe is where they are to build a permanent Church building. The land they now rent can only have a temporary structure on it and so nothing permanent can be built.

Along with a place to worship, Pastor Loujan and the leaders of the Church dream to have an orphanage as well as a training school on the property. 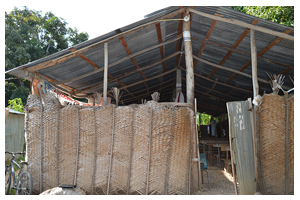 Pastor Loujan and his wife are partners in ministry and have a vision to touch the people of Grand Goave. Together, they desire to know Jesus and to make Him known to their village.

And A Door to Hope wants to join them in their vision.

Would you consider giving a year end gift to help A Door to Hope bring the love of Christ to Pastor Loujan and his church community in 2014?